Methods
Eighty healthy men aged 30–39 years, whose body mass indexes (BMI) were ≥ 20 and < 25 were enrolled in the study and randomly divided into two groups: those who ingested a food with (active group) or without (placebo group) PFE over an 8-week period. The effects of exercise on energy metabolism were evaluated in an examination at the start of ingestion (0-week examination) and at post-ingestion (8-week examination).

Results
Changes in energy expenditure (EE) at 8 weeks after ingestion [(8-week examination)–(0-week examination)], i.e. ΔEE was significantly increased in the active group compared with that in the placebo group (p < 0.05). There were no adverse events related to the test food during the study.

Conclusions
Overall, these results indicate that intake of PFIF can increase EE on energy metabolism in healthy adults.

Obesity can induce hyperglycemia, dyslipidemia, and high blood pressure, and has been associated with the onset of lifestyle-related diseases.1) Therefore, prevention of obesity is important for health promotion. Obesity is defined as an excessive accumulation of body fat,1, 2) which is caused by an imbalance between energy intake and energy expenditure (EE), and it is important to maintain this balance to prevent obesity.3)
Increasing EE through physical activities (exercise or nonexercise activities) in daily life has been shown to be an effective method for preventing obesity.1, 4) Recent clinical trials have shown that capsinoids and Kaempferia parviflora extract from food can efficiently increase EE, 5-7） and have anti-obesity effect of reducing abdominal fat.8, 9）
Kudzu are perennial climbing plants belonging to the Fabaceae family. The kudzu flower is known to be a rich source of isoflavones.10)
Pueraria flower extract (PFE) is a hot-water extract of the kudzu (Pueraria thomsonii) flower. Several clinical trials have shown that PFE has anti-obesity effects such as reducing abdominal fat.11)-15) The active ingredient of PFE causing the anti-obesity effect is thought to be isoflavones, namely tectorigenin, tectoridin, and tectorigenin 7-O-xylosylglucoside.14, 16) Furthermore, PFE appears to exert its effects by suppressing lipogenesis in the liver and promoting lipolysis in white adipose tissue (WAT) and thermogenesis in brown adipose tissue (BAT).17) Moreover, it has been reported that isoflavones from PFE increase EE, and exert anti-obesity effects in animal model.16) Based on these previous research results, intake of Pueraria thomsonii flower isoflavones tectorigenin, tectoridin, and tectorigenin 7-O-xylosylglucoside (PFIF) is thought to exert anti-obesity effects such as reduction of abdominal fat by increasing EE. However, we have not verified the effects of PFIF oral intake on energy metabolism in humans.
Therefore, in the present study, we performed a randomized, double-blind, placebo-controlled, parallel-group study in healthy males ingesting foods containing PFE to investigate the effects of PFIF oral intake on energy metabolism in healthy adults.

Tablets containing PFE (TOYO SHINYAKU Co., Ltd.), maltitol, sucrose esters of fatty acids,silicon dioxide, and cellulose were used as the test food (active food). The placebo food consisted of tablets containing maltitol instead of PFE, and caramel color to render the tablet types indistinguishable. To maintain blinding of the study subjects and the care providers, the active and placebo foods were distributed with plain aluminum packets sealed individually containing daily intake, 2 tablets (0.25 g per tablet) per packet. The nutritional compositions of the test foods per daily intake are shown in Table 1. PFIF contained in the active food was calculated to be 35 mg per daily intake. 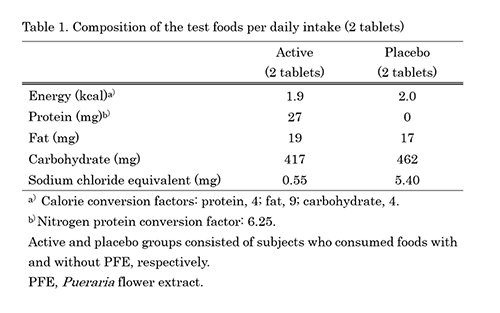 The target sample size in the present study was set to 80 subjects (40 subjects per group) based on the sample size (significance level 0.05, power 0.80) calculated using visceral fat area as an index referred to previous reports that confirmed the anti-obesity effects of PFE,13), 14) and taking into consideration potential future dropouts or discontinuation. Subjects were recruited as paid volunteers, and the investigator enrolled 80 men who met the following inclusion criteria and did not violate the exclusion criteria.

A randomized, double-blind, placebo-controlled, parallel-group study (allocation ratio of 1: 1) was conducted, and consisted of a 1-week pre-observation period, an examination at the start of ingestion (0-week examination), an 8-week test period during consumption of test foods, and a post-ingestion examination (8-week examination).

The investigator enrolled the subjects in this study according to the inclusion criteria and the exclusion criteria, and the statistical analysis manager randomized the subjects into two groups by a block-randomized method using age, height, BMI, body fat, and estimated muscle mass as adjusting factors. The controller not directly involved in the study assigned the two groups to the active group and the placebo group. In addition, to ensure blindness, the controller prepared and sealed a table (key code) describing the assignment result, and kept the container closed until the key code was disclosed after the analysis for determining the subjects for further evaluation.

The test subjects took each test food 1 packet (2 tablets) once daily with water or lukewarm water during the test period. During the test period,, all the test subjects were instructed to have similar life style as before the study, except for instructions of this study, to avoid a large amount of alcohol consumption, supplements and/or functional foods affecting energy metabolism, and massive caffeine-containing beverage and food consumption for one week before the start of ingestion, not to participate in other studies, and to prohibit from engaging in alcohol consumption 2 days before each examination, from spontaneous exercise (except daily living) from 1 day before each examination, before each examination.

On the day of the examination, the subjects were provided a breakfast (one rice ball) 1.5 h prior to the commencement of the exercise, and then provided active food or placebo food. Prior to exercise, the subjects wore a respiratory metabolism measurement mask, and put a heart rate measurement electrode on their chest, and then were asked to be in a sedentary position for 15 min (rest). Following that, the subjects exercised for 40 min, and then were again in a sedentary position for 15 min (recovery).

Respiratory metabolism was assessed according to the breath-by-breath method using a respiratory gas analyzer (AE-300S; Minato Medical Science Co., Ltd.). The exercise in the examination was a pedaling exercise using a bicycle ergometer (Aerobike 75XLII; Combi Wellness), and consisted of 2 min at 15 watts and 2 min at 25 watts, which served as a warm-up, and then 36 min at a constant load of 35 watts, making the total exercise time 40 min. The rotation speed of the pedal was 60 rpm under any load. The measurement was performed in a constant temperature (set to 20 ± 2 ° C) and humidity (set to 48 ± 5%) room. The subjects were prohibited from eating and drinking during measurements. Before and after the measurement, the physical condition was confirmed by interview, blood pressure and pulse rate measurement, and body temperature measurement.

This study was registered in the UMIN clinical trial registration system (ID UMIN000036693). The study was reviewed and approved by the Ethical Committee of Nihonbashi Cardiology Clinic (Chairman: Mamoru Nishimuta, Date of approval: April 25, 2019) and conducted under the supervision of physicians in accordance with the World Medical Association Declaration of Helsinki 64th WMA General Assembly, Fortaleza, Brazil, October 2013 and the Ethical Guidelines for Medical and Health Research Involving Human Subjects. The subjects were fully informed of the study, and informed consent to participate in the study was obtained in writing from all subjects. The study was conducted in Meiji Gakuin University Yokohama Campus, and Shinagawa Season Terrace Health Care Clinic (from May, 2019 to August, 2019). There were no changes to study protocol after the study commenced.

Primary outcome measure was energy metabolism. Statistical analyses were performed in per-protocol set (PPS). To compare differences among the groups, mixed model and unpaired t-test for each examination was used. In addition, paired t-test was used to compare differences among periods (in each group). A p-value of < 0.05 in a two-sided test was used as the criterion for statistically significant differences. Statistical analysis was carried out using PASW Statistics 18 (IBM). Missing data were treated as missing values, and statistical data were expressed as mean ± standard error.

The flow diagram of the study design showing the flow of subjects in each group until analysis for evaluation in this study is shown in Fig.1. The subjects’ characteristics are shown in Table 2. There were no significant differences in the value of age, height, body weight, BMI, body fat, and estimated muscle mass between the groups. 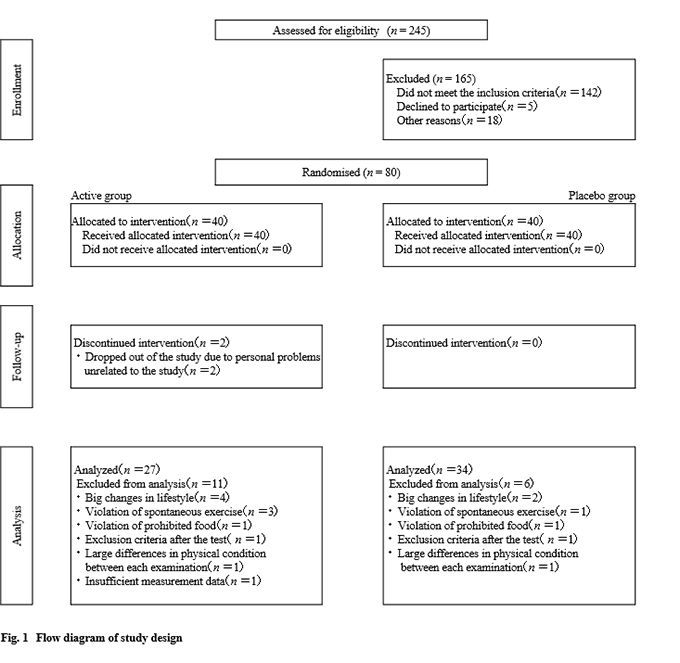 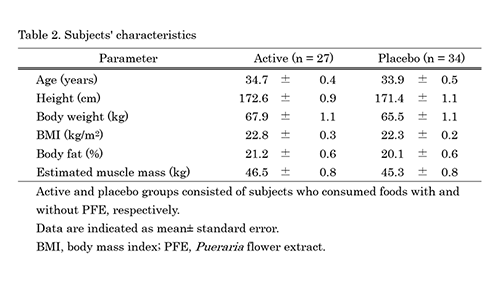 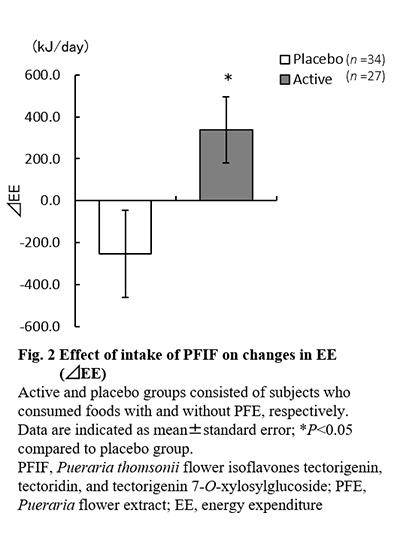 During the study, there were no adverse events related to the test food, including abnormal laboratory values.

In the present study, we performed a randomized, double-blind, placebo-controlled, parallel-group study in healthy adults ingesting foods containing PFE (active group) or foods not containing PFE (placebo group) over an 8-week period to investigate the effects of PFIF oral intake on energy metabolism in healthy adults. The results indicated that PFIF oral intake significantly increased EE during exercise. According to the National Institute of Health and Nutrition documents about revised edition of METs table of physical activities (2012), intensity of exercise in the present study was approximately 3.5 METs. According to the documents, the intensity of 3.5 METs is known to be equivalent to the intensity of physical activities in daily life such as exercise or nonexercise activities such as housework. Thus, it is considered that PFIF oral intake can increase EE in healthy adults during exercise or nonexercise activities such as housework in daily life.

Meanwhile, it has been reported that PFE increases lipolysis gene (HSL) expression in WAT in animal model, as well as shows an anti-obesity effect such as reduction of abdominal fat.17）Since it is known that the promotion of lipolysis by HSL activity in WAT enhances energy utilization of lipids, the PFIF in this study were expected to have the effect of lowering RQ. However, no significant difference in RQ was observed compared with the placebo food. It is known that carbohydrates and lipids as energy sources are used to approximately the same extent during low-intensity exercise.19)As the intensity of the exercise in the study was low (~ 3.5 METs), the effect may be less visible. Therefore, the effect of ingestion of PFIF on RQ should be examined in a future study using more optimal exercise load conditions.

In this study, the increase in EE due to the intake of PFIF was approximately 140 kcal/day when converted to kcal. According to previous reports, improving EE and intake of 100 kcal per day is useful for preventing weight gain.20） It is also thought that a 1-cm reduction in waist circumference is equivalent to a reduction in body weight of about 1 kg, and it is necessary to improve EE and intake of 7000 kcal to reduce 1 kg of visceral fat. 21）In our previous study, the reduction of waist circumference in healthy adults after 12 weeks of ingestion of PFIF was approximately 0.8 cm to 1.2 cm; 13-15）this can be achieved by improving EE and intake by approximately 67 to 100 kcal/day per day. In this study, the increase in EE due to PFIF intake showed an effect exceeding this value. Based on these findings, it is suggested that an intake of PFIF in healthy adults increases EE and might thereby prevent obesity. In addition, no adverse events attributable to the test food were observed, suggesting that there are no safety issues associated with the long-term ingestion of the food containing PFE.

In summary, our results indicate that intake of PFIF can increase EE on energy metabolism in healthy adults. In addition, no safety issues were observed with the intake of PFE-containing tablets.