Methods
Forty healthy subjects with a body mass index (BMI) < 30 were enrolled in the present study. The subjects were randomly divided into two groups and ingested either a food containing pine bark extract or a food without pine bark extract (placebo) for 8 weeks. Vascular endothelial function was evaluated by flow-mediated dilation (FMD) measured before, and at 4 and 8 weeks following ingestion.

Results
After 8 weeks, FMD improved significantly in the PBE group compared with the placebo group (p < 0.05).

The vascular endothelium is the innermost cell layer of the blood vessel and functions to maintain efficient blood transport to peripheral organs by controlling contraction and expansion of blood vessels, blood coagulation, inflammation, oxidation, etc. 1). The functional degradation of vascular endothelium (endothelial dysfunction) is linked to cardiovascular events and is considered to be present at the preclinical stage of arteriosclerosis 2). A community-based cohort study revealed that increasing age, BMI, smoking, and blood pressure were especially associated with endothelial dysfunction 3). On the other hand, it has been reported that consumption of antioxidants such as polyphenol 4) or vitamin E 5) improves vascular endothelial function. Therefore, improving vascular endothelial function by reconsidering lifestyle and using functional food materials is thought to be important for maintaining healthy blood vessels.

Pine bark extract (PBE) is an extract from the bark of the pine tree that is rich in polyphenols, represented by oligomeric proanthocyanidins 6). It is known that the major components of the procyanidin dimer contained in pine bark are procyanidin B1 and procyanidin B3 7). PBE has been reported to have various effects such as antioxidant 8) and antihypertensive effects 9), blood flow improvement 10), and vascular enhancement 11). Concerning the effect on vascular endothelial function in subjects with risk factors of endothelial dysfunction (high fasting blood glucose, high blood pressure, or climacteric symptoms), it has been reported that consumption of tea beverages containing PBE significantly improves vascular endothelium function 12).

A tablet-form food containing PBE (TOYO SHINYAKU Co., Ltd.), maltitol, microcrystalline cellulose, sucrose esters of fatty acids, and silicon dioxide was used as the active food (PBE). As the control food, in order to make it indistinguishable from PBE, a food containing an equivalent amount of caramel pigment instead of pine bark extract in PBE was used (placebo). To maintain blinding of the subjects and the care providers, PBE and the placebo were distributed with plain aluminum packets sealed individually containing daily intake: two tablets (0.25 g per tablet) per packet.

Table 1 shows the analysis values of nutrient composition. The amount of PBE-derived procyanidin, which is the sum of procyanidin B1 and procyanidin B3 contained in PBE, was calculated to be 2.4 mg per daily intake.

The target sample size in the test was set to 40 subjects (20 subjects per group) based on the sample size (significance level 0.05, power 0.80) calculated from a previous report 12). Subjects recruited were paid volunteers, and the investigator enrolled 40 subjects (16 men and 24 women) who met the inclusion criteria and did not violate the exclusion criteria.

Inclusion: (1) Healthy men and women aged 40 to 64 years old. (2) Subjects with a BMI < 30. (3) Subjects who can make self-judgment and voluntarily give written informed consent.

Exclusion: (1) Subjects who contract chronic disease and are under treatment.(2) Subjects who cannot stop using medicines, quasi-drugs, supplements, and/or functional foods (including Food for Specified Health Uses or Foods with Function Claims) affecting blood pressure, lipid metabolism, blood sugar level, body fat, and so on during the test periods.(3) Subjects with a history and/or presence of serious diseases (e. g., liver disease,

It was a randomized, double-blind, placebo-controlled, parallel-group study. The study consisted of a pre-observation period (two weeks) and a test period (eight weeks) for a total of ten weeks. The investigator enrolled the subjects in this test according to the inclusion and exclusion criteria, and the statistical analysis manager randomized the subjects into two groups by a block-randomized method with a 1:1 allocation using random block sizes of four with sex, age, and FMD%. The controller not directly involved in this study assigned the two groups to the PBE group and the placebo group. In addition, to ensure blindness, the controller prepared and sealed a table (key code) describing the assignment result. The container was kept closed until the key code was disclosed after determining the subjects included in the statistical analysis.

During the test period, the subjects in each group were required to consume the allotted food: one packet (two tablets) once daily with cold water or lukewarm water. The subjects were allowed to chew and consume the test food.

The protocol of this study was registered with the UMIN Clinical Trial Registry (ID: UMIN000036602). The study was reviewed and approved by the Ethical Committee of Kobuna Orthopedics Clinic (Chairman: Toshio Kawata, Date of approval: April 19, 2019) and conducted under the supervision of physicians in accordance with the World Medical Association Declaration of Helsinki 64th WMA General Assembly, Fortaleza, Brazil, October 2013, and the Ethical Guidelines for Medical and Health Research Involving Human Subjects. The subjects were fully informed of the study, and informed consent to participate in the study was obtained in writing. The study was conducted in Maebashi North Hospital (April 2019 to August 2019). There were no changes to the trial protocol after the trial commenced.

②  Physical Examination
During the physical examination, height, and body weight (BMI) and vascular endothelial function were evaluated. The vascular endothelial function in this study was evaluated by flow-mediated dilation (FMD) with ultrasonic inspection equipment before intake (baseline), four weeks after intake (4w), and eight weeks after intake (8w) as the primary outcome. Briefly, after measuring the resting arterial vascular diameter of the upper arm, the forearm was squeezed with a cuff for 5 min, and the maximum arterial vascular diameter after releasing the cuff was measured. The examination values (FMD%) were calculated as the percentage change in the maximum arterial vessel diameter from the resting arterial vessel diameter.

The primary outcome of this study was FMD%. The effect of the test foods on FMD was evaluated using the per-protocol set (PPS). The interaction between the PBE group and the placebo group was compared by two-way repeated measures analysis of variance. If the interaction was observed, the between-group comparison at each examination of both measured values and change from baseline was performed with a two-tailed unpaired t-test. All statistical analyses were performed using the Statistical Package for Social Science (PASW Statistics18, IBM, NY, USA) and statistical significance was defined as p < 0.05. The subject characteristics were expressed as mean ± standard deviation (SD), and the other data were expressed as mean ± standard error (SE). 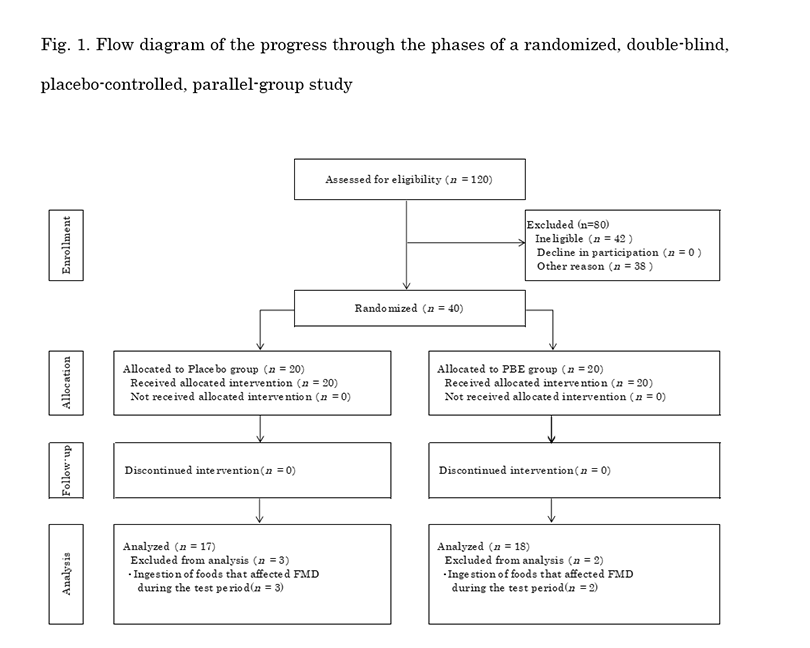 The FMD results are shown in Table 3. Between the PBE group and placebo group, the interaction of FMD% was observed (p<0.05), and there were significant increases in the PBE group compared to the placebo group in both measured values in 8w and change from baseline to 8w (p<0.05 in each).

Maintaining a healthy vascular endothelium is thought to be important because endothelial dysfunction can degrade normal vascular tone and structure and lead to the progression of atherosclerosis 14). ApoE-deficient mice used as a model for atherosclerosis are known to have very high blood cholesterol levels, and in ApoE-deficient mice, it has been reported that administration of PBE suppressed the enlargement of arteriosclerotic lesion area in blood vessels by lowering blood cholesterol 15). LDL, one of the lipoproteins that carry cholesterol in the body, was reported to damage vascular endothelial function by being oxidized16). In a cohort study, the level of LDL oxidization in blood was reported to be related to a decrease in FMD% 17). Regarding the effect of PBE on LDL oxidation in humans, following a single dose of PBE, an enhancement of the antioxidant defense capacity of LDL was observed 18). These results suggest that blood cholesterol and lipoprotein may be involved in the improvement of vascular endothelial function by PBE.

These results indicate that food containing PBE leads to an improvement in vascular endothelial function in healthy subjects.